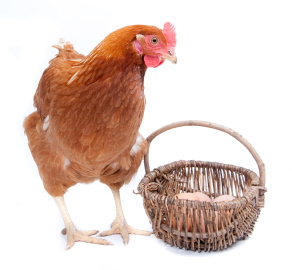 It's the question that has puzzled humankind since the dawn of time. Or at least for quite a while. Which came first - the chicken or the egg? If I had a dollar toonie for every time I've been asked that question as I've staffed displays at various egg events over the 15 years I've worked for Egg Farmers of Ontario, I'd be a wealthy woman! I don't think most people actually expect an intelligent answer. (Of course I always say eggs! Surely that's the most intelligent response! LOL) They just find it an amusing question to ask someone who works with eggs!

Well, it appears this puzzling mystery may have just been cracked. And the yolk's on me!

Using a supercomputer to simulate egg formation inside a chicken, UK scientists from Sheffield and Warwick universities say it looks like it might all start with the chicken.

To form an egg shell you need a particular protein called ovocledidin-17 or OC-17. A protein found only in a chicken's ovaries. Hmmm...... OC-17 converts calcium carbonate into calcite crystals which make up the shell. (Interesting side note: Chickens have the ability to form calcite crystals faster than any other species, creating 6 g (0.02 oz) of shell every 24 hours. Guess that's why they are so efficient at laying eggs.) Consequently, you can only get an egg - or at least the egg shell - if it's been inside a chicken. The scientists advise this is a partial answer to the popular 'which-came-first' question, so I'm holding out hope that further research may yet position the egg as numero uno. Although I'm not holding my breath.

Check this writer's take on the topic: